NAA has been proud to both help fund and develop the Nevada Archaeology Month Posters for the last 20 years.

Often these coincided with the NAA’s Annual Meeting Theme or celebrated an anniversary within Nevada history and culture.

We don’t quite have all of the posters updated just yet to the site but below you will find some from the last several years.

For more information about Sponsoring an Event in May during Historic Preservation & Archaeology Awareness Month please visit the Nevada SHPO’s website. 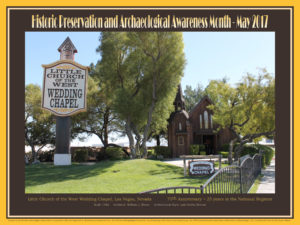 2017 – 75th Anniversary of the Little Church of the West Chapel, Las Vegas, NV 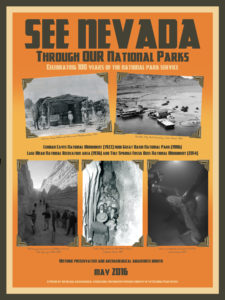 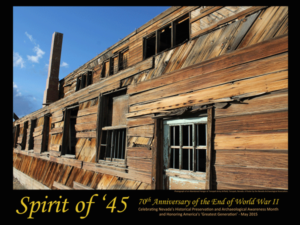 Nevada became the 36th state in the United States of America on October 31, 1864.

Thousands of years ago, mammoths, camels, sloths, and even lions roamed the Las Vegas Valley. October 1962 to February 1963, a massive excavation involving extensive bulldozer trenches was conducted by a team of 30 scientists from New York, Nevada, and California. The thirty scientists were hoping to uncover the secrets of these Ice Age animals and the early people who may have lived alongside them. The project was also picked by Willard Libby to field test the Carbon-14 dating technique for which he won the Nobel Prize in Chemistry in 1960. 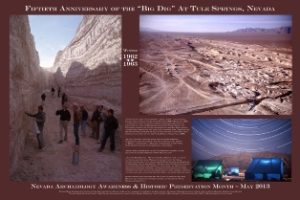 “The Thousand Creek Ranch was initially part of the extensive holdings of William K. Ebeling who arrived in the area by 1890 (Humboldt County Assessor: Land Assessments 1890). Ebeling and his mother, Johanna Sophia settled on a parcel near the confluence of Thousand Creek and Virgin Creek in the northern end of Virgin Valley (Homestead Patent 04991). The Ebeling’s immigrated to the United States from Germany in 1871, when William was only 12 years old (United States Census Bureau, 1902). 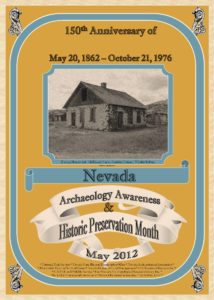 Ebeling expanded his holdings in the following few years, acquiring McKinney Camp, and a parcel east of the mouth of Thousand Creek Gorge (Humboldt County Deed Records 1917 and 1920a). All three parcels were located along Thousand Creek and had natural meadows for grazing livestock. By the 1910s when William was in his fifties the ranch was nearing its maximum size and success. Ebeling “ran a mixed outfit, a few cattle, occasionally sheep, and predominantly horses” (Miller 1984). Ebeling kep

t hired men, sometimes with families, and stationed them at both Thousand Creek Ranch and McKinney Camp (Pinger 1985). It appears that construction at the three ranches probably occurred between about 1900 and 1910.

Each of Ebeling’s three main ranches: Home Ranch, Thousand Creek, and McKinney Camp have similarly constructed buildings. Although several of the buildings have been removed there is consistency in the building materials, technique, and style that suggests they were constructed by the same person. The Home Ranch currently consists only of the barn, willow corrals, milk barn, and shed. A small sod house was Ebeling’s first building on the property but there is no trace of it, his second home, built in 1911, burned in 1959 (Pinger 1985:42). At Thousand Creek the house, barn, and chicken shed remain intact, along with willow corrals. McKinney Camp is the most intact of the complexes containing a barn, willow corrals, chicken shed, house, root cellar, and two story bunkhouse. All of the ranch buildings are constructed of stone, most with a combination of local rhyolite and basalt cobbles accented with quarried sandstone for lintels, doorways, and quoining. According to Pinger (1985:41) “Construction is believed to have been supervised by the Koenig Brothers, stonemasons from Cedarville.” 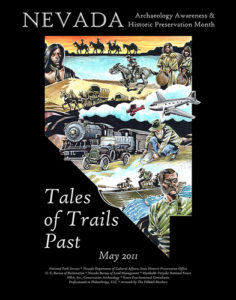